Posted on February 19, 2016 by northumbrianreflections

DAY 6       Zwolle: New Monasticism in a Dominican Monastic Cloister and learning more about Thomas a Kempis

Floor and I set off early to travel to Zwolle where I was a speaker at a conference looking at new monasticism. Oversubscribed, the interest in the subject has grown considerably in the last few years. I was introduced by a Dutch reformed pastor who told the conference delegates that he had first heard me many years ago speaking at a Renovare conference, which had gathered a very much smaller group than yesterday’s conference and where the subject of new monasticism would have been treated then with great suspicion. Now it is inspiring people from both Established churches and the Emerging missional initiatives throughout the Netherlands and across Europe. It was a stimulating day and one which provided lots of conversations and interactions with people who I am sure we will see much more of within our own Northumbria Community.

After the conference came one of those unimagined treats. Jeff Fountain, a Kiwi who came for a year and has now spent over 30 years years living in Holland, someone whom I have longed to meet since first hearing about him and his passion for Europe. He and his Dutch wife Romkje are good friends of Floor and Ada and Shirley and I spent a wonderful evening with them in their home in the grounds adjoining the YWAM base in the Netherlands. A great meeting of hearts, the six of us, joined later by their amazing foster daughter, Golien, shared our life stories and discussed some of the serious challenges as well as some opportunities facing Europe at this critical time.

Jeff is widely known and highly respected in so many circles across Europe. He established the Schuman Centre for European Studies after serving as the director of YWAM (Youth with a Mission) Europe for over 20 years. Floor and I meet Jeff at the memorial to Thomas a Kempis, whose famous book, the imitation of Christ has influenced millions of people since it was first published in the 15th century. It was one of the first devotional books I read after coming to faith and I have continued to return most years to its rich spiritual treasures. It is a deep yet gentle book, filled with the spirit of the love of God and has brought understanding and comfort to millions of readers over the ensuing centuries and provided them with a source of heart-felt personal prayer. His meditations on the life and teachings of Jesus, written in times even more troubled and dangerous than our own, have become arguably, second only to the Bible as a guide and inspiration. 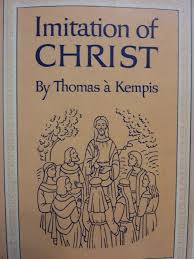 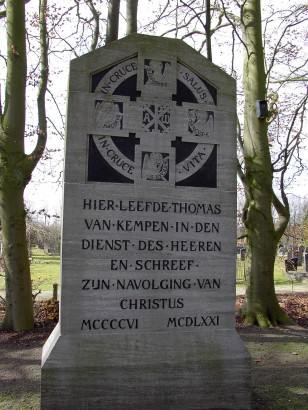 Jeff told us about the monastic movement of his day and the Order of the Common Life that Thomas a Kempis entered and which had an influence and impact in mediaeval times.

I was fascinated to read later at Jeff’s home of the founder of the Order who spoke of ‘Resolutions and Intentions, not Vows’. Reflecting on this I was reminded of our own Community’s ‘Yes to Availability and Vulnerability ‘ more akin to resolutions and intentions than vows.

It was a movement that came to an abrupt end with the  Dissolution of the Monasteries that followed the Reformation and the actions taken by Henry VIII in England and his Protestant counterparts across the Continent.

The dissolution of the monasteries in the late 1530s was one of the most revolutionary events in English history. There were nearly 900 religious houses in England;  monasteries, nunneries and friaries. One in fifty men of the population of England, estimated at around 2.75 million were in religious orders. Monasticism had flourished across Europe in the 12th and 13th centuries. In Britain,  the early influences of monastic movements like the Celtic and Anglo Saxon saints had a significant bearing on the development of monasticism which came to an abrupt halt under the reign of Henry.

It’s true that many monastic orders forgot their vows and commitment to live out the gospel and got entangled and beguiled by the very things they had chosen to renounce. The money and power permeated and corrupted the monastic vocation and led to excess and a contraction of the true spirit of monasticism.

It puzzles me today that older Religious communities, who are dying but who have come to own such fine properties and estates are unable to release and gift some of the emergent new monastic  communities that are in such need of places to call ‘home’ and to give expression to their calling to the monastic life. Only yesterday I talked with a remarkably gifted young woman who is exercising an amazing ministry among young people in her city in the Netherlands. Inspired by Dominican spirituality she is seeing many young people coming to faith or having their faith energised by the spirituality of monasticism. She is operating within a monastic cloister but will the Order, now in it’s last stages of life, with most Brothers in their 80’s, gift her and her young people with the building or at least part of it? No, it will, like so many similar situations, be sold to property developers to release capital, not for monasticism but for other purposes. Market forces dictating a monastic order ~ what on earth is going on? What happened to vows of poverty, chastity and obedience? …

There are but a few stones that remain of the former monastic settlement in Zwolle where A Kempis and the Order lived. What Isis is doing in Syria today in destroying the sacred places and historical sites, is just an echo of what was carried here in the Netherlands but also throughout Europe in the 16th century, including Britain where monasteries were ‘bulldozed’ by armies under the direction, in our country of Henry VIII.

The buildings have gone but the memories and foundations of faith and the influence of gold people like Thomas a Kempis and the Order continues. Last year, YWAM here celebrated his life and we enjoyed seeing the photo of Floor taking the part of a Kempis in the festival day that YWAM organised.

After dinner, Jeff reminded me again of something that the vast majority of people in Europe and certainly in Britain are unaware of, that the foundations of the European Union were laid by a Christian, Robert Schuman back in 1950. What is so dangerous in the current debate about whether Britain exits the EU is that it has become dominated by economics. Issues of peace, reconciliation and cooperation are sidelined. It’s the market economy and not morality that is determining attitudes and outcomes. The strength of sterling more important than issues of human rights, justice, mutual support and cooperation. Border controls, territorial rights, British Sovereignty are seen to be of the most paramount importance. We must retain the right to limit the number of suffering people who are seeking our help. We must at all costs retain our sovereign right to self determination even if we flout human rights and fail standards of behaviour that give dignity and esteem to others. I am not saying that the EU does not need reforming, far from it but the dangerous situation that we have created and now find ourselves in could have serious consequences for not only Europe but the wider world. I had to turn last night’s Question Time (yes, you can watch it here in the Netherlands) off because what I heard from most of the panel and certainly from the audience was an anti European stance. Such antagonism and anti European rhetoric is deeply disturbing, with so much of rooted in ignorance, prejudice and self-interest.  Of course self-interest is an understandable protective mechanism when confronted by challenges and any change but it is the ruin of relationships. Europe teeters, I believe on the brink of something very dangerous. Rarely in the course of history has Europe experienced such a period of peace and cooperation as we have known since the end of the Second World War. Yet now, I believe it is being threatened and undermined by the self interest and political posturing that is so damaging. The leaders of today’s European nations have little or no personal experience of war in their homelands and appear oblivious to the conditions and factors that led to the rise of Hitler and the Third Reich.

It’s very interesting here in the Netherlands to get other European’s views on how Britain is perceived and it is not good. One well informed Dutch delegate at yesterday’s conference told me that European leaders would try hard to help our Prime Minister, because they know that if Britain leaves it will signal other dissident groups to want to break away and that could lead to some serious consequences, not least for the poorer nations who would in turn lose their relative stability and inevitably conflict, violence and war would ensue. Have we learnt nothing from the lessons of the 1930’s when self-interest and and nationalism reared its ugly head and caused the Second World War?!    Let’s beware of Edmund Burke’s words:  Those who don’t know history are doomed to repeat it.

God have mercy upon us.

2 Responses to New Monasticism and Europe