Posted on March 1, 2017 by northumbrianreflections

Today marks the celebration in Wales of St David’s Day. Many will mark the day by wearing a leek or a daffodil, the national emblems of Wales, or by displaying the flag of St David, which features a yellow cross on a black background. Across the land there will be celebrations, festivals and in several places people will still dress up in traditional Welsh costume. 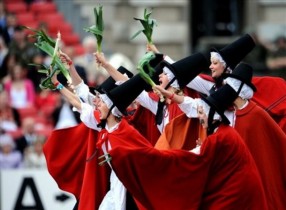 It is claimed that St David was responsible for the custom of wearing leeks in memory of his spiritual discipline of fasting on water and leeks. Shakespeare popularised the idea by saying that wearing the leak originated as recognition of the Welsh soldiers bravery the battle of Crécy 1346 in his play Henry V. Wearing another symbol, the daffodil, was promoted in particular by former Prime Minister Lloyd George. Daffodil is cennin Pedr (i.e. Peter’s leek) in Welsh, easy to conflate “cennin” (Leek) and “cennin Pedr”.

But who was St. David, whose day we celebrate today?

He was a great Celtic saint who founded at least ten monasteries, establishing them in the ascetic ways of the Desert Fathers.

It was a tough monastic call for those who joined the communities. The monks did heavy manual labour and ate only bread and vegetables. They didn’t brew beer or produce wine but only drank water. David decreed that, “they should labour so hard that they want only to love one another. There should be no conversation beyond what is necessary.” He taught that anyone asking to join a monastery should be made to wait at the door for 10 days and treated in some sense with hostility. It was only if they were patient and forbearing through this treatment that they were to be welcomed into the demands of the ascetic monastic way of life. No “welcome in the valleys” for those who were seeking God in the Welsh monasteries at the end of the sixth century!

It seems incredibly harsh to us but there are some gems of wisdom to be gleaned from that early Celtic tradition: 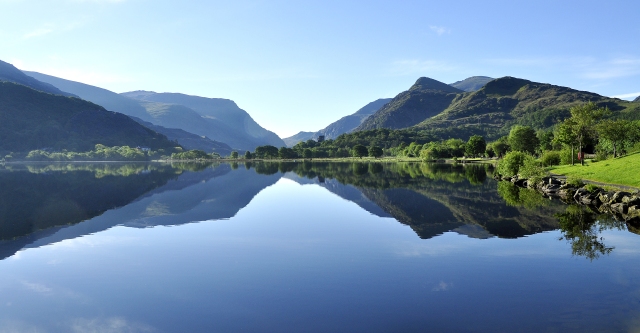 I thank God for Wales, its land and people and for the rich inheritance of faith that has been passed on down through the ages. A land of contrasts; snow-capped mountains, wild coastlines, beautiful green valleys, sleepy villages and energetic cities. To travel through Wales is to immerse yourself in the nation’s epic story, ancient scenery, historic landmarks and memorable characters. A land that was in many ways shaped by the Celtic saints, who laid the foundations of faith that has rippled through the centuries in the valleys, hills, towns, villages, farmsteads and cities from this small and compact nation.

A land that has witnessed several periods of revival as well as those times of languishing memories, entrenched traditions and moribund legacies that celebrate and commemorate the past but can cripple life in the present. A country, like Scotland, for better or worse, influenced and in many ways dependent upon the governance and policies of England and the Westminster Parliament that can seem removed from the realities of everyday life for people in these Celtic nations.

A country of contrasting landscapes where the beauty of its hills and valleys and coastline is contrasted with the ugly scars of post-industrial wastelands, ‘abandoned’ and ‘forsaken’ towns and villages where all that is left is memories, sport and the faint sounds of singing, spirits beaten by exploitation, neglect and disregard and all but a trace of aspiration disappearing. 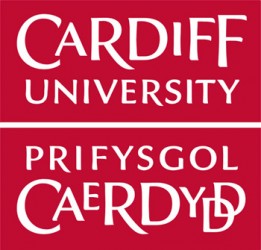 For my one year postgraduate studies at Cardiff University, under the wing of South Wales Baptist College, I give thanks to God. Nurtured in the godly but relatively prescribed and closed conservative evangelical environment of Bible College in Berwick-upon-Tweed, I found myself swimming in the waters of liberalism and contextual theology and dipping my toes into philosophy, sociology, psychology and education.

In other ways it was a very difficult year. We moved without a grant with our firstborn, ten days old, into a cold and inhospitable manse, where the church thought it was doing its student minister a great service by offering them a house free of rent in return for two Sundays, (4 services) some pastoral ministry and midweek prayer and Bible studies. I remember being awarded a £50 prize for an essay which enabled us to go shopping for a month and buy some second-hand lino from an indoor market stall to put down in our living room. Any request for some help with the house that was barely fit to live in was met with sympathy but no help. The fact that the roof of the kitchen and bathroom fell in just a couple of months after we left was either a consequence of neglect or an act of judgement, or perhaps both?… I was young, naive, liable to be ‘used’ and unable to adequately protest, petition or respond accordingly to a plight that caused my wife and young baby son to suffer. Whilst I enjoyed the comfort of a university lecture room and library, college chapel and sitting room, they were left to struggle and suffer in a cold, damp and inhospitable environment. By the grace of God we survived, not because of the situation but inspite of it.

Too many ministers spouses and families suffer inhospitable and intolerable situations at the hands of the churches they serve, many of whom are scarred for life and whose faith is impacted negatively by such experiences. There were some good and godly people in the church but the overriding culture of the place was one of ‘calculating meanness’ cultivated by some very un-godly attitudes and behaviours. I discovered that if they liked the Sunday preacher they would be given £10, whereas if they took a dislike to them the ‘gift’ would be halved. It was not that the church had no money. I discovered this just weeks before we left to return north and enter full-time church ministry and was able to dismantle the myth that the church had no resources. With the help of the church secretary we discovered that there was over £20,000 in the bank and that the church could well afford to pay half a stipend, the other half being offered by a mission agency to bring a full-time minister into the community. Needless to say the prevailing culture turned down the opportunity, held onto its money and the church continued to decline, believing that it could somehow get away with or even be blessed by God, whilst living with meanness and paying lip service to the faith that was once vibrant in the lives of their forebears.

Another memory was that of driving our first car, a mini, bought for £150 having been pulled out of a hedge, put back together and hand-painted in British rail green carriage paint. When it rained the footwells filled with water. We needed a car to get out of the valley, over the hill and down into Cardiff for my three days a week at university. So little money, I drove as economically as I could and managed on most occasions to cruise down either side of the hill with the engine off. We hardly ever saw the fuel gauge needle get out of the red low fuel warning zone, apart from those occasions when we filled the tank and returned north to our parents for holidays, warmth and plenteous food.

I learnt a lot; mostly about how not to be church. I can barely remember anything of the lectures but I’m grateful to God above all else for the remarkable mentoring I received from a wonderful godly man and his amazing and hospitable family. T.J. Russel-Jones, renowned as a scholar and preacher throughout Wales was my mentor. Under his godly guidance, gentle influence and example I was schooled further in the discipline of spiritual formation. What had been the greatest contribution of Bible College, that of being inspired and mentored in how to love God, continued under his leadership. Like our Bible college principal Dr. ‘Doc’ Rigby, both men combined godliness with great grace and had those endearing qualities of strength with humility and abilities mixed with humour and self-deprecation. For all the hardships of that year in South Wales, the overriding blessing was that of being under the tutelage of T-J. His godly influence shaped and continues to inform my life and leadership to this day, nearly 40 years on. I learnt recently that he was a conscientious objector.

Thank God for those older generation of leaders who see both the privilege and responsibility of mentoring younger generations and whose lives bear witness to the reality of their living faith in Christ that has not grown dim or become weary by the innumerable challenges and struggles that ministry entails.

I have forged some very good friendships with fellow ministers in Wales in recent years, both from the north and south of the country. I’m privileged to return on a regular basis to teach at the college, under whose wing I was for that year, the only Baptist College that in my training I had any connections with. It was with joy and a great sense of fulfilment that I was the guest keynote speaker at the Joint Welsh Baptist Assembly in Carmarthen a couple of years ago and I have enjoyed those occasions when I have preached and also brought Community teams to serve the churches in that great country. 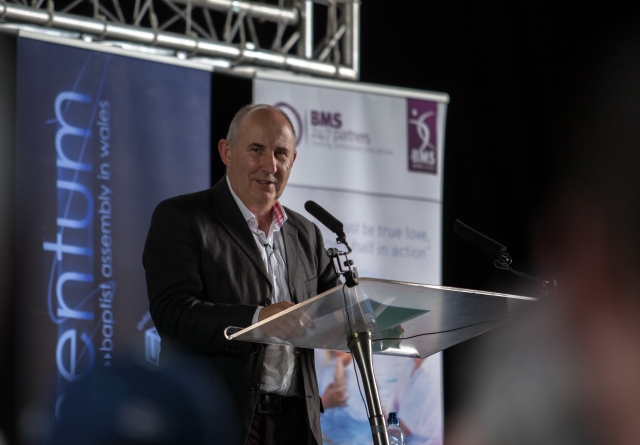 Of note, was a time when I led a Northumbria Community team as we spent a weekend in Bangor and presented Celtic Fire which I had written to tell the story of the Celtic saints which included the founding of Bangor and the monastic community there by St Deiniol.

Rehearsals over, within two hours of the performance I worked with Paul and Jill, two of our Community musicians and wrote a hymn which concluded the night’s performance. It was a fitting conclusion then and an appropriate way to thank God for Wales and to pray for its land and people today, on St David’s Day.

In the past our Celtic forebears

Brought the gospel to this land

Light and life dispelled the darkness

Lives and land redeemed by God

God of Aidan, God of Deiniol

Here the cry for this our land

Here the cry for this our land

We tonight have heard the story

Of their faith, their love of God

Hold the faith deep in our hearts.

Here our cry, oh God we ask you

See the faith of our forbearers

Realised in hearts and homes.

So to you our hope and future

We now live to sing your praise

And from here in the power of your Spirit

This entry was posted in Uncategorized. Bookmark the permalink.
Loading Comments...