The pin is out and the grenade has been thrown

Posted on February 2, 2017 by northumbrianreflections 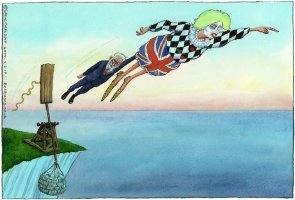 I went to bed last night disturbed by so much of what is happening in the world. The seeds of war, sown in the attitudes, policies and actions are now beginning to surface. Orwellian “alternative truth” is being deployed to manipulate and deceive the masses, undermine democracy and contribute to a world that is increasingly characterised by conflict, division, violence and war. A world that is once more seeing the rise of dictatorial leadership, capitalising on the failures of old institutions and systems and people’s fears and insecurities.

History reminds us that after economic recessions there is inevitable conflict and probable war. As nations resort to self-interest, old alliances and treaties are undermined and broken. The pin of the ‘grenade’ was removed with Brexit and after last night’s vote in the House of Commons, it has been thrown. Its explosive power will I believe cause damage and destruction to many in Britain, across Europe and the wider world. Resorting to what is right for us is an understandable but ultimately damaging policy that fuels the fires of nationalism and stands in stark contrast to the teachings of Jesus and the ways of his kingdom. Grenades which in the hands of more powerful leaders are being thrown as seen in some of the statements coming out of the White House in the first two weeks of the presidency.

“The people have decided” is the mantra of those who have determined our exit from the European Union. Policies are now being pursued that reveal an increasing shift to extreme right wing measures, unchecked by disorganised, disordered and delusionary parties on the left. Very few are taking the ‘centre ground’ as Western democracy shifts from consensus to partisan, doctrinaire dictates. Of course it’s not new. History has seen this all before and in living memory for some, the 1930s in Germany.  I am not one of those who draws comparisons between Hitler and the likes of Nigel Farage and Donald Trump but I do want to alert people to the economic and social conditions, the attitudes and actions that are seen today in Britain and the USA which are similar to those in Germany before the Second World War. A period when Hitler and Goebbels used referendums to great effect to influence the masses, incite nationalism and give legitimacy to abhorrent policies that led to a world war and the loss of over 60 million people, just under a fifth of the world’s population. 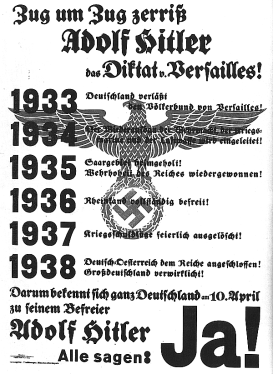 As I lay in bed with the words of Wednesday’s Felgild Compline ringing in my ears; Calm me O Lord, as you stilled the storm. Still me, O Lord keep me from harm. Let all the tumult within me cease. Enfold me, Lord, in your peace… The peace of God be over me to shelter me my thoughts and prayers went out to the people of Ukraine. A land and people, just a short while ago featuring on news bulletins and front page headlines, now largely forgotten. In the aftermath of Donald Trump’s rise to power and his links with Russia, some of them very dubious, and his floating ideas of lifting sanctions, President Putin has been able to flex his military muscles once again in Ukraine. The conflict in that country has raged for almost three years in which more than 10,000 people have died. The ceasefire that was agreed in Minsk back in 2014, in spite of the deadlock in political negotiations, has held in check some of the large scale conflict over the past two years. But in the last week the shelling and the cutting off of water and power in parts of Eastern Ukraine, experiencing temperatures of -18C have led to the loss of life and an escalation of violence and a simmering war.

With a weakening European Union powerful dictators can capitalise and wreak havoc and cause untold suffering to those who rely upon their European neighbours for help against their aggressor. Just one example of what I believe will be many consequences of our decision to leave the EU. A union whose major achievement, recognised with the Nobel Peace Prize back in 2012, has been to keeping the Continent of Europe free of war for over 60 years ~ the very reason why the founders of the EU, Robert Schuman and other foreign ministers and ambassadors, founded it.

There are economic arguments both ways for whether we will be better or worse off now that we are leaving the European Union. We desperately need those trade deals with the USA and other nations and good though it is for us to speak to the leaders of nations like Turkey, how sad that our ministers and business leaders were rejoicing in a trade deal in arms, weapons of war.

I have written before that I believe that we are entering a new Dark Age and like the prophet Jeremiah, I cannot speak “peace peace” when there is little, or in many parts of the world today, no peace. For the poor, for the over 60 million refugees and for my children and children’s children I lament the way things are developing here in Britain and the Western world. A lament shared by the former Dean of Durham Cathedral, Michael Sadgrove who wrote last night after the vote in the Commons;  I’m glad my German Jewish mother did not live to see this day. She died just after the referendum, incredulous at the vote. We are recklessly throwing away so much of value and putting the future of the UK and of Europe at at risk. Time for lament. Amen, Lord have mercy.

David Lammy, a fellow Christian and member of Parliament who last night voted with his conscience, defying his own party’s three line whip against the Brexit Bill and triggering Article 5. In so doing he recalled the words of Shakespeare ; That England that was wont to conquer others Hath made a shameful conquest of itself (William Shakespeare, Richard II).