Posted on February 25, 2016 by northumbrianreflections

After a quiet and relaxing day, which gave us the opportunity to spend some quality time with Ben and Lucie, we decided to leave early the next day for our return home. We love Ben and Lucie as do many in the Community and many more who were privileged to meet them when they served on the house team at Nether Springs for two years until last summer when they returned to Belgium. I first met Ben when he was a student at the International Baptist Theological Seminary in Prague and the fruit of the partnership between the seminary and the Community has been a great blessing to us in many ways. It is so heartening to witness young people like Ben and Lucie, seriously seeking God and exploring what a vocation means. Trying to live by the values of faith and not buying into the secularist and consumerist addictive ideologies that promise much but do little for the soul and have little to contribute to the wellbeing of society. 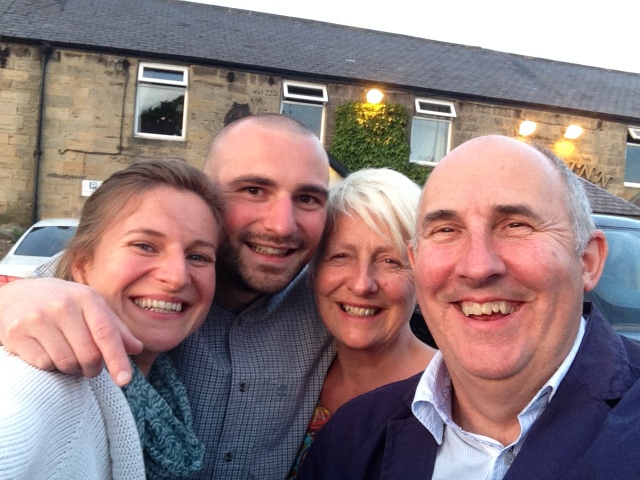 Now when I say we left early the next day I mean early. We set the alarm, arose and left Spa just after 4.00am! Our hope was to get round the ring road around Brussels before the rush hour and get to Calais in time for the 9.40 ferry. Snow was falling for the first hour, turning to rain as we moved north and whilst the traffic was busy, we had a very good journey and arrived at the ferry terminal to be told that we could get on the next ferry just after 8 o’clock. This was great news and a smooth crossing and an earlier than anticipated arrival in Dover enabled us to begin the journey north. By the afternoon we had reached North Yorkshire where we stopped off to see Shirley’s mum and for me to get some sleep for a couple of hours. Rested and refreshed, we made the journey home, accompanied by The Archers on Radio 4 and the football commentary of Middlesbrough’s game against Cardiff on Radio Tees, (they won 3-1). Shirley has been very gracious and generous in letting me listen to sport on the radio and television throughout our married life. She has no interest whatsoever in most sports but is happy that the rest of the members of our family both play and support our respective teams.

It is good to be home. Northumberland is our home and for the time being where we belong. We, like those who joined us on the Community Weekend, have returned home, rejoicing at the wonders he has shown us. It is been really good to have been accompanied on this trip with Shirley; a rare treat and whilst I have been busy working it has been lovely to have her company and be together on my birthday last week in Bruges.

I return home encouraged by what I have witnessed, challenged by gaining a further insight into the plight of refugees and the range of attitudes and ways different countries are taking in response to the crisis and enriched by the people whom we have been privileged to meet and share with on our travels.

And now home to a very cold but bright Northumberland it is time to resume life as ‘normal’. Emails to catch up on, more speaking engagements and lectures to prepare and an Overseers Day and Trustees weekend requiring preparation.

I am mulling over and reflecting on the trip. Like the African who said to the tourist after they’d travelled for a few days; I’m waiting for my soul to catch up with my body. It’s easy to just move on to the next thing without taking time to reflect, and for Christians, to pray about what you’ve experienced whilst travelling. The fruits of such pondering may never be shared but the principle of prayerful reflection is at the heart of the contemplative life.

There is much in African and Native American spirituality that conveys wisdom to our fast paced, frenetic, consumer orientated world. As I reflect and consider how we are responding to the refugee crisis, rooted in concerns about immigration and the economy I am reminded of the following Native American Indian wisdom story: I saw a very large house. They told me it was a bank and that the white men place their money there to be taken care of, and that by and by they got it back with interest. We are Indians and we have no such bank, but when we have plenty of money or blankets, we give them away to other chiefs and people, and by and by they return them with interest, and our hearts feel good.

Such wisdom speaks volumes and challenges our self-interest and reflects more of the values of the Kingdom of God than so much of our contemporary secularist and consumerist, post-Christendom society.

Respect for the world God has gifted us with, for other dwellers on this sacred and beautiful planet is rare. However, I have been privileged to see respect for God, one another and other human beings throughout our European wanderings and for this, I am deeply thankful to God, the source of goodness and love.