Posted on April 20, 2014 by northumbrianreflections

40 years ago today my life changed. A mountaintop experience. 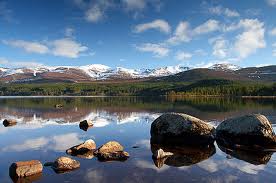 I had linked up with a group that I knew from my Harrogate school days in the Cairngorms of Scotland. I was training to be an Outward Bound instructor, they were, unbeknown to me before that week, a group of Christians. Over the course of a few days, their lives, their love and friendship toward me, together with their explorations into the “I am” statements of Jesus in John’s gospel, orientated my life in a different direction. I hadn’t been averse to Christianity but I had never paid any more than lip service and certainly had no allegiance or attendance at any church.

Easter is a reminder to me of the day my life changed forever.

It was the day when God became real and faith became life transforming.

Coming down off the summit of Mount Suie, with a fresh spring in my step, we made our way to the little church on the side of the loch at Kincraig where I encountered some welcoming people, unfamiliar, unknown liturgies, reasonable singing and some average hymns. Two things that impressed me however and which have remained with me to this day: Firstly the priest proclaiming from the front at the outset of the service, “Christ is risen” to which the congregation responded with enthusiasm, “He is risen indeed. Alleluia!” Then later as the service moved towards its conclusion, we went forward to receive communion, the bread and wine, simple elements but symbolically, they spoke so powerfully to my heart then, as they do now. 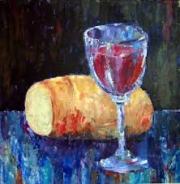 I always look forward to celebrating Easter because it takes me back to that turning point in my life and also because it is the greatest and most incredible day in the history of the world.

It’s more than just a holiday, more than a time to celebrate the beauty of spring with its green pastures, blooming flowers, blossoming trees, news born lambs and the sounds of birds singing in the hedgerows.

Easter is the most revolutionary day the world has ever known. It’s the day that as Christians we celebrate Christ’s resurrection from the dead, shattering the tomb of death and ushering in the dawning of a new world.

It is the feast of the unexpected, when Christ conquered death, disturbing every attempt to make God predictable and Christianity safe.

You can try to reduce this extraordinary, world changing event into a commercial, consumerist opportunity to sell chocolate but to ignore the implications of Christ’s resurrection is to miss the point of life itself.

Lord Darling, former Lord Chief Justice, said of the resurrection; “In its favour as a living truth there exists such overwhelming evidence, positive and negative, factual and circumstantial, that no intelligent jury in the world could fail to bring in the verdict that the resurrection story is true”

His resurrection affirms the story of God’s love and his redemptive purposes for the world, putting things to right, bringing justice and peace, salvation, healing and holiness, life and hope. As Tom Wright, puts it, “Jesus resurrection is the beginning of God’s new project, not to snatch people away from earth to heaven, but to colonise earth with the life of heaven. That, after all, is what the Lord’s prayer is about.”

And as I look back on that day in 1974, I now see that the call to follow this risen Christ, was a vocation that drew me into a movement of his that not only changes the human heart and its affection to God but also carries with it the transformational power to make a difference for lasting good in the world. To align oneself, with the millions of those who have followed Christ, in every continent, in every age, throughout the history of the world, who have prayed, “your kingdom come, your will be done on earth as it is in heaven“.

Yesterday I was at my local constituency party hustings, during which we voted for and appointed our prospective parliamentary candidate for the next General Election. It was an engaging and enjoyable experience and both members of the party contesting the appointment gave good speeches and handled questions well. They encouraged me to think that there are still people on the Left of politics who could not only critique right wing Conservative free-market, consumer policies but who could also offer a credible alternative socialist worldview and some sound political policies. As I held up one of the many placards, urging people to Vote Labour, for the inevitable photo opportunity, my support of the party was rekindled, having suffered and agonised for years over whether I would remain a member, after the wicked decision to flout and undermine the United Nations, and go into an illegal and disastrous war in Iraq and Afghanistan, the consequences of which are being played out to the detriment of the world every day since. 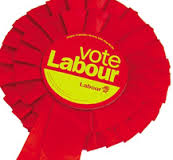 Encouraged as I was by the political rhetoric of the party as it prepares for what will be a very uneasy election campaign, it was nothing in comparison with the confidence and belief that I felt this morning as we celebrated Easter and Christ’s resurrection. Proclaiming “He is risen. He is risen indeed. Alleluia!“, taking communion on Holy Island and joining other Companions and Friends of the Community to renew our vows on the beach facing Cuthbert’s island. Looking out across the glistening blue sea, I had no doubt that the greatest power to affect transformation to the world for good, lies not in politicians but in Christ. Not in governments but His Governance. Not in legislation but in his redeeming grace. Not in the love of power but the power of his love.

Just over a year ago I was in the Czech Republic and I met some people who had lived as believers under the oppression and suffering of Russian communist rule. When Russian tanks rolled into Czechoslovakia in 1968 and put down the Prague uprising they turned the cathedrals and churches of the city into museums. Priests and ministers who lost their posts had to take menial tasks. Several became cleaners in the former cathedrals and churches and there, cleaning, dusting, polishing they would silently pray. One university lecturer lost her teaching post as a result of Russian rule and becoming one of the cleaners in a cathedral she prayed as she polished the same prayer for over 20 years; “Don’t be afraid. Sing out for joy. Christ is risen. Alleluia.” She lived to witness the Velvet Revolution, returned to work at Charles University, saw the cathedrals and churches reopen and join the Easter congregation in 1990 to proclaim, “Christ is risen. He is risen indeed. Alleluia!” 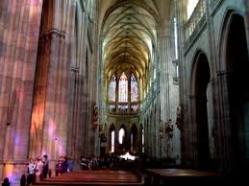 The first Easter greeting I received today was from a friend, Андрей who is living in Donetsk in Ukraine. The situation there is grim, intimidation, propaganda, threats and reprisals, fears and uncertainty but his greeting and attached image, (see below) was emphatic: 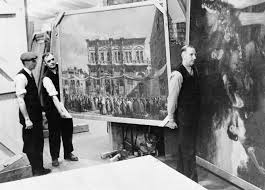 With the outbreak of the Second World War, and the bombs that began to rain down upon London, the collection of paintings at the National Gallery were removed and sent to Wales and onto Canada for safety. Two years into the war the public started to complain. Understanding the reasoning behind the paintings being removed they nevertheless longed to see some, to lift their spirits. A letter appeared in the Times in January 1942 to the trustees of the National Gallery, asking if they would take the risk and exhibit one picture each week. The trustees responded and decided upon one month and wishing to cooperate with public opinion they conducted a survey. There were astonished to find that it was not a preference for paintings of the strength of the human spirit or its resilience to combat adversity. Overwhelmingly the most desired painting that the public wanted to see was Titian’s Noli me tanger, his picture of the Resurrection. 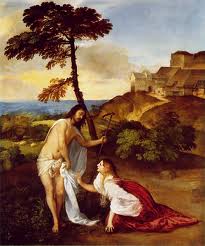 It was the same spirit that was witnessed in Johannesburg under apartheid. A political rally, opposing apartheid had been cancelled on the orders of the government. Bishop Desmond Tutu offered as an alternative, a service inside the cathedral. The congregation gathered making their way through large numbers of riot police and armed soldiers who waited outside. Inside the cathedral, more police lined the walls recording everything that was said. Tutu declared confidently that the evil system of apartheid could not stand, but it’s day had come to pass, that its injustice would be no more. Pointing his finger at the police around the walls and mindful that his words would be carried to the governing authorities beyond, he declared “You may be powerful, indeed very powerful, but you are not God! And the God whom we serve cannot be mocked. You have already lost!” Then this little man, coming out of the pulpit and walking alongside the police officers, with his disarming, characteristic big smile said, “so since you have already lost, we are inviting you to come and join the winning side!” The whole cathedral congregation erupted in delight, in whoops of joy and jubilant cheers, they sang and danced, worshipping God, the God of resurrection power. Nothing could defeat the resurrection faith.

Celebrate with joy today and live in the light of the Christ’s resurrection throughout the coming years….. 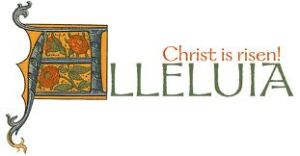