Posted on March 7, 2014 by northumbrianreflections

News headlines might grab our momentary attention but very few sink deep into the consciousness or bring about any lasting change. The dumbing down of news reporting is governed so much by keeping the audience watching, which renders news more as entertaining than engaging. The desire to get an exclusive, to capture the moment, a photo opportunity and not engage or be moved by what is being reported, renders us losing something of our humanity. 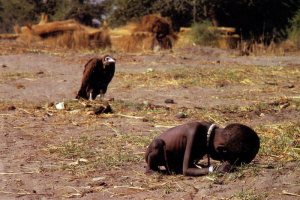 There is the salutary story of the journalist Kevin Carter who was a war correspondent during the Biafran war in 1993. He took the now iconic photo of a vulture preying upon a dying Sudanese child. The image is very powerful and it appeared in the New York Times and Carter went on to win the Pulitzer Prize for his photo but he took no joy in receiving such an accolade. He reflected on the twenty minutes he spent adjusting his lens to take just the right frame of her suffering, one predator, a bird of prey with another, armed with a camera. He was adhering to the guidelines laid down for journalists in the Sudan who were told not to touch famine victims because of the risk of transmitting disease. He lived for a few years after that incident consumed with the violence he had witnessed and haunted by the questions as to the little girl’s fate and the regret he carried for not intervening, he committed suicide. When getting a photograph, capturing an exclusive, keeping the audience ratings high are more important than responding to human need, we are in grave danger of losing one of the most basic components for human life in society, compassion.

We have just entered the season of Lent, a period that affords us the opportunity to reflect. For a number of years now I have embraced some of the Lenten disciplines, giving up some things, fasting from others and being more intentional about some areas of my life. Among the things that I intend to cultivate in this season that leads up to and prepares us to celebrate Easter is to take some aspect of the news seriously and to pray about the people, issues and situation that I’m hearing on the radio, seeing on the television screens or very occasionally, reading in the newspaper. There is a sense in which we suffer from “information overload” in our contemporary culture, being bombarded from all forms of media with information about so many things. So just as the monastic calling reminds us, to will one thing, ie. to seek and to love God above all else, I am taking that focus on the one thing, to pray about some news story. Prayer and intercession is an invitation to enter into an adventure that engages us in holding before God people and situations, some of whom we have no direct relationship with.

Let me illustrate; I read the other day about an Afghan man who lost his family when their boat sank. Fleeing with other Afghan and Syrian migrants, their vessel, with its engine failing, was spotted by some Greek coastguards. Sensing that help and a harbour of safety and a place of refuge was in sight, their hopes were quickly dashed. Their only words, they cried out to the coastguards, “help, please help, help”. They threw the rope to the coastguards vessel but instead of being towed into safety they were taken at great speed back out to sea. With guns firing overhead, the coastguards made it clear that the migrants must return to Turkey, from where it was believed they’d come from. They towed the migrants boat so fast that it began to take in water, the fragile vessel being hurled across the sea by the speed and wake of the coastguards vessel. The cries of migrants on board, desperately trying to both bail out the water that was threatening their vessel and to appeal to the coastguards who wielded threats and guns was to no avail. Even when they held the babies and children above their heads and pointed to the women on board, the callous disregard of the Greek coastguards showed no compassion. Eventually the rope snapped but the damage to the migrants boat when they were taking in water was overwhelming the vessel at an alarming rate. They had been taken out of Greek waters, abandoned and within the next 10 minutes the vessel capsized. A dozen people are believed to have died, eight were under the age of 12.

Such callous brutality in the Aegean Sea caused a momentary outcry, a day’s newspaper headlines in a few European newspapers but the story has left a deep and lasting residue in my mind and I have spent several occasions since, praying and being mindful of the Afghan migrant who has lost his wife and children. Living with the nightmare that has besieged his country, escaping at great cost and risk to himself and his family, he turns to the West, believing that there is hope on the horizon, the opportunity of a new beginning. His dream of heaven became a living hell and today a broken man languishes within a Greek detention centre. Seated in the centre he spoke to a reporter, shaking his head in disbelief. At 39, he has lost everything. “Nothing makes sense,” he sobbed. “All I had wanted to do was get to Europe. Now we don’t want anything: asylum, protection, bread, a home. All we want now is the bodies of those we love”. You might wish to remember in your prayers Fadi Mohamed. 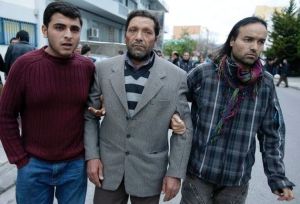 If that is how Greece, addresses the problem of immigration, then I question every penny that the rest of Europe has spent in bailing out a country that for a number of reasons, including greed, injustice, corruption, financial mismanagement and poor government got itself into so much debt.

Immigration is clearly an issue but it cannot be tackled simply by protectionism. We are world citizens and we need to be asking questions about the causes that lead people to migrate. There are issues of justice, poverty, exploitation, the abuse of power, violence and war that lie behind the issue of immigration. Famine, war, violation of human rights, suffering and oppression are common features that lead people to leave their homelands. Failure to recognise these facts and to only be concerned with one’s own well-being is not only foolish but, to be clear about what the Bible says, such an attitude is sinful in the sight of God. When issues of immigration are fuelled by racism it is time for all those who follow Christ to speak out. Make no mistake, the media’s sympathy and distorted headlines and suppression of the truth, highlighting only those minority cases which support and fuels racist attitudes, are a greater threat to society than any immigration issue. Are we so lacking in an understanding of history that we forgotten what evils were unleashed upon the world in the last century when nationalism was allowed to raise its ugly head. The Holocaust was more than a Jewish event. Millions of people were exterminated; migrants, Czechs, Greeks, Gypsies, Russians, Serbs, Socialists, Poles, and Ukrainians, along with homosexuals, mentally and physically handicapped people, trade unionists, prisoners of war of many nations, and still others whose identity may never be recognized.

Racism is deadly, it is a cancer that invades the human spirit and destroys relationships as God intends. Racism and its inherent hatred of foreigners was probably what motivated those Greek coastguards. Their racist, callous actions showed them treating other human beings as less than human. Once you do that, you are one step removed genocide and ethnic cleansing.

Jesus’ strongest words of condemnation were spoken to those who neglected the poor, who didn’t feed the hungry, clothe the naked, give water to those who are thirsty, shelter those who are homeless and welcome the refugee.

Stark but important things to think about during Lent.