Posted on December 31, 2013 by northumbrianreflections

Attending a Christmas Day service will never be quite the same as this year’s in Ireland.  With nearly all our close family, all three generations, we made our way across the winding lanes and undulating landscape of County Down for a service at the church whose name brought much puzzlement to one of the little ones, ”Why is it called, Kilmore Church, Grandad?”It’s not easy to explain to a four year-old that the word Kil in Gaelic means ‘church’.

The amusing episode which brought a smile to my face ever since has been the memory of the rector, warmly greeting the congregation, coming down the aisle and beginning his family service talk. Making connections with the children he was enquiring and discovering some of the delightful presents that they had received allegedly from Santa Claus. (Isn’t it funny, that we teach our children not to talk or go to strangers, not to be enticed by anybody who offers them sweets or other gifts and then, once a year, children are handed over to an elderly man, wearing a very strange outfit, who lives in a cave or wooden shack and if they good and sit on his knee they might receive a present! Never really understood that?).

As other children showed off their dolls, toys or latest gadgetry, the shocked, certainly surprised expression on the rector’s face revealed an encounter with three of our grandchildren; I am not sure that he had ever seen the Incredible Hulk, Batman or a Tyrannosaurus Rex in his congregation before but here this unusual ‘trinity’ appeared and momentarily threw him from his carefully prepared talk about Christmas puddings!

Christmas for us in Ireland held many happy times in moments of sharing as a family. The storms that raged around us on two nights gave way to beautiful blue skies and sunny days. The only shadow on our family gathering was the absence of our Armenian daughter-in-law, who is, as yet, unable to take up residency within the UK and our son-in-law who is completing his pilot training with British Airways in Arizona.

As we successively bade farewell to the family; dropping our youngest daughter off at Belfast airport, our younger son for his ferry and bade farewell to our oldest, his wife and three children who live in Ireland, I now know with greater intensity what it felt like for my own parents as we left them following many happy family gatherings. A mixture of sadness at parting and joy in seeing how the children and grandchildren were growing and developing and finding a life independent from the constant parental care and involvement in their lives.

I know that for many, family rifts and a breakdown in relationships are a cause of much pain and heartache and the prospect of Christmas induces much sadness and anxiety for many but I am thankful for the family that I am privileged to be part of and who afford me such joy and pleasure. Not that we are perfect in any sense and we too have our fair share of hassle and angst at times in trying to accommodate the needs and wishes, wants and desires of so many people. But in the big things; outlook on life, values and priorities we are pretty much on the same page and that augers well for good relationships and we are able to celebrate our unity in diversity. So like the Psalmist, I can as a father and grandfather declare, children are a blessing, they are a gift from God (costly, but a blessing!).

We have many good friends in Ireland and it was always going to be difficult to see them when time, rightly, was given over as priority to being family together. As it says in our Community’s Rule of Life:  Family life is holy ground.

We did however manage to invite some of our friends who lived in close proximity to where we were staying around for an evening before we left. With short notice and with their own busy Christmas plans and family commitments, they nevertheless came and we had a delightful time sharing together, catching up, laughing, discussing and simply being together. These are friends who we have come to know and love and with whom we feel at home. Friends who we sadly don’t see very often, but when we do there is a heart connection and depth of friendship that is very life-giving. We talked about our hopes and fears for the coming year, a year that for many in that circle of friends will bring many changes and challenges. We ended our time together with a short reflection, the lighting of a candle and prayer, a fitting end to a gift of an evening together. 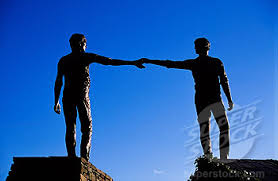 Friendship is a gift from God. The first covenant which God made with his people was with Abraham, who was known as a friend of God. Friendship is a theme that resonates throughout the pages of Scripture and when Jesus called people to follow him and founded a community of disciples, he called them his friends. I love the Quaker expression, The Society of Friends.

There is something inherently good about friendship. As a gift of God it is something to be treasured. It is especially within the context of the Northumbria Community that I have seen friendship and companionship emerge, blossom and grow among people of different backgrounds, traditions, experiences, cultures and faith journeys. Friendship as a gift of God that becomes one of the foundational building blocks of community; friendship that can celebrate diversity, friendship that is not coercive or manipulative; friendship that is not based on fulfilling one’s own needs but by being concerned for the welfare of others.

It is I believe a sign of God’s Spirit at work among people when friendship is experienced among people. One of the great gifts of God and the good news of his Gospel is that he is able to change and transform people from enmity to friendship, from indifference to compassion, from independence to interdependence.

I love one of the songs that we often used to sing in the early years of the Community’s life, ‘ God called forth the people’. One of the verses declares: When we started, we were strangers, we hardly knew each other’s names, now we are brothers and sisters, and we will never be the same. I love it because it conveys very simply our experience as a Community, an experience of friendship and companionship that is a true gift of God. In a fragmented world where conflict and disharmony abound, the gift of friendship is a sign of the kingdom of God breaking in, a bridge of hope and a new way of being and relating in a world where increasingly we are struggling to cope with people who are different from ourselves. Friendship is the antidote to sectarianism, racism and sexism. 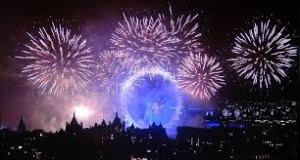 This evening, New Year’s Eve, back at home in Northumberland we will celebrate the New Year in uncharacteristic fashion for us. We were too late to get tickets for the annual New Year’s Eve meal, dance and party at the local hotel. The trip up to Edinburgh to celebrate Hogmanay appears now to be a thing of the past as the idea of driving home in the middle of the night no longer has the appeal that it once did.

No, this year we will drive over to Kelso with our and eldest daughter and her two children, potter around the shops and cobbled streets, take our dog along the riverside walk, before returning home to enjoy a meal together. We will no doubt see the New Year in at midnight, whether we participate in first-footing remains to be seen but we will raise a glass and if the television’s on sing along with the familiar Hogmanay song auld lang syne. We will do what most people, south of the border certainly do, singing the first verse and chorus and then humming the tune for the rest of the song!

Robbie Burns who compiled the song was a very interesting character and one day as we pass through Dumfries & Galloway on our way to Ireland I will stop off at the museum dedicated to his memory and discover more about this remarkable poet. Auld Lang Syne begins by posing a rhetorical question as to whether it is right that old times be forgotten, and is generally interpreted as a call to remember long-standing friendships.

Whether we raise a glass or not to toast the New Year in I will at the turning of the year pause and give thanks to God for family and good friends.

I pray that your New Year celebrations will be good and that God’s blessing may rest upon you, your family and your friends throughout the coming year. In the challenges and opportunities, encouragements and testing times ahead may you know the companionship of family and friends as you journey into the future.

Bless you and take care