Posted on December 14, 2013 by northumbrianreflections

I’ve just returned from St Oswald’s near Whitby where I spent some time, mostly silent, on retreat. It’s a valuable discipline that helps me to engage more deeply with the Advent journey in preparation for the celebration of Christmas. It also affords me some intentional time to reflect on the year that has passed.

Going into silence and later sharing with my spiritual director, the overriding feelings that are carried in my heart are those of thankfulness and appreciation for the experiences of 2013.

As is often the case, when you go into silence, thoughts and feelings emerge that trigger mixed emotions and can lead to necessary responsive actions. Such was the case that first evening. Following compline, which for me was very early at 8.30, I retired to my room and sat quietly. Unbidden and unexpectedly I was taken up thinking about the situation of conflict between two good and godly people that remained unreconciled for some time. I felt compelled not only to pray but to write to them on my return from being on retreat. With that resolution made, I went to bed and slept soundly, waking only with the aid of my alarm the next morning. 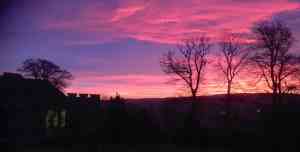 Showered and dressed I had half an hour before joining the Sisters for Morning Prayer. I pulled back the curtains in my room and before me was the first traces of the sun dawning. The dark and silhouetted landscape across the valley gave way to gleaming shafts of light, red and orange, pink and purple, deepening and radiating streaks of fire across the disappearing dark sky. This was better than breakfast television or the Today programme on the radio.

I had preached on the passage in Isaiah last Sunday morning and now before me was nature’s visual representation of those words of promise spoken through the prophet: The people who walked in darkness have seen a great light; those who lived in a land of deep darkness— on them light has shined. Isaiah 9:2.
The chapel bell was heard in the distance and the lights of the chapel, through stained-glass windows of the Celtic saints, seen across the garden complemented the sunrise and drew me from my room with a view to my seat in the chapel for Morning Office.
The habit of reading Scripture each day, whether I want to or not, is something I know nourishes and nurtures my soul. Ever since being with my friends at IBTS, (International Theological Baptist seminary) in Prague for six weeks earlier this year, I have sought to read a psalm most days. Here in St Oswald’s chapel we read antiphonally, which if you are able to do so without embarrassment or amusement, can actually be a very helpful way of reading scripture with others. It was good as were the intercessions, praying for different people and situations in the world.
I was reminded again of the significant ministry that Religious Orders play in prayer, holding before God the needs of others. Glancing across the chapel, I was mindful of two dear sisters, whose love and devotion to Christ had led them into holy orders many years ago, and who have prayed for me and the Northumbria Community over the last decade. One very frail in body, the other feeling her age but both razor-sharp intellectually, very understanding of happenings in the world and ‘spiritual giants’, who’s listening ears, wise counsel and warm, generous hospitality and grace mirrors the love of the Christ whom they are betrothed to.
I thank God for them, for the Order and for other monastic communities, many of whom we in new monastic circles have drawn inspiration from.
Following Office, breakfast was eaten in silence with the Sisters and other guests and I returned to my room, praying and journalling and later meeting with my spiritual director, with whom there is an ease of sharing one’s heart openly, knowing that being vulnerable and honest will never be exploited or abused, rather it is a means of grace and is soul enriching.
I spent most of the rest of the time praying, reflecting on the landscape of my own heart, pausing often to confess, owning thoughts and feelings, the good the bad and on this occasion, not too many ugly! Some clarity comes to an issue that I’ve been giving time and attention to in recent weeks. A sense of proportion to a niggling question that I’ve been wrestling with and a new perspective on a situation that will demand my time and attention in the New Year is given.
It has been, on this occasion, a deeply peaceful and satisfying time. Just as I am beginning to wallow in the pleasure of the experience I am led to spend time in praying for others. The thought that keeps resonating with me as I pray for people is There is no slack in the system. It seemed a little odd, the idea, but the more I ran with it, the more I was praying for people, places, businesses, organisations, the health service etc where it seems there is so much stress and pressure being caused by there being no slack in the system. No space for thinking clearly, acting wisely. To be able to respond when someone goes off sick or system failure.
Here I was in a convent, retreat house setting, where like our own Community’s mother house, Nether Springs, there is a rhythm to the day, a pattern that orders life in ways that do provide slack in the system; space for reflection, relationship, creativity, re-creation and good practice.
I lead a very busy life and carry lots of responsibilities, travel extensively, work and serve in a myriad of different contexts yet I am kept from the frenetic activity and drivenness that is so much a part of contemporary Western culture by the rhythms and patterns that are found in monastic spirituality.
I believe one of the contributions that the Church and Christian communities can make to a pressured, frenetic pace driven society is to help recover the principle of Sabbath, not as a legalistic entity but as a practice and discipline that is actually life-giving.
I conclude my time by sitting with a mug of tea looking out the window and seeing the sunset. I had hoped for something that might rival the beauty of the dawn but had to be content with a mediocre display! I turned to the Psalms and read Psalm 113 which included these words and concluded my retreat, from the rising of the sun to its setting the name of the Lord is to be praised.
The blessings of being on retreat.